Rajasthan is considered one of the hottest states in India, with a very dry and hot climate. However, there are still four seasons: summer, monsoon, post-monsoon and winter. Rajasthan is all about celebration. No matter when you visit, there are plenty of colourful fairs and festivals throughout the year to enjoy. Get in touch with us and we can advise you on the best time to visit with a tailor-made trip to suit your requirements.

Rajasthan is a great place to celebrate New Year’s. The weather is at its best with pleasant daytime temperatures (10°C). There are lots of great festivals throughout the month, beginning with the Kite Festival, which is celebrated annually on 14thJanuary. The festival marks the sun’s passage across the Tropic of Capricorn with kites in a myriad of colours, shapes and pattern. This is followed by the Jaipur Literature Festival, ‘the world’s biggest literature festival’, which has seen the likes of Oprah Winfrey, Stephen Fry and Rupert Everett take to the stage.

This month is the perfect time to visit the desert, when it is warm during the day and cold at night. The Desert Festival is a feast for the eyes with camel races, turban-tying contests and traditional puppetry. If you miss it, visit the Nagaur Fair instead with animal races, tug of wars and a thronging bazaar.  As the evening approaches, the ground turns into an open-air theatre where locals showcase traditional dance and music.

March sees the last of the cool days of winter as daytime temperatures creep above 30°C. There are plenty of festivals. The biggest is Holi, where Hindus celebrate the beginning of spring by throwing water and gulal (coloured powder) at anyone within range. The night before, a big bonfire is lit to represent the Hindu mythological story of Holika. A few days beforehand is the colourful Brij Festival in Bharatpur, which can be combined with a trip to its UNESCO-listed bird sanctuary. In Udaipur, the start of spring is vibrantly celebrated with the Mewar Festival.March is also a great time for wildlife watching with the water sources drying up and animals congregating at the few remaining sources.

The heat continues to grow in April, marking the start of summer. However, it does mean that there are less tourists and you have more space to yourself plus lower accommodation rates. This month also sees Gangaur, known as the Festival of Marriage, a colourful occasion in Jaipur where people pray for 16 days for a good husband. Hindus also celebrate Rama’s Birthday this month with processions, music, fasting and feasting. Alternatively, this is an ideal time to visit cooler hill stations and the Himalayas where the temperatures are ideal during the Indian summer like Shimla, McLeod Ganj, Mussoorie and Leh Ladakh.

Life slows down as the humidity builds up in anticipation of the monsoon. Daytime temperatures climb to over 40°C. During this month, the three-day Summer Festival takes place in Mount Abu, Rajasthan’s only hill station,which is filled with local dancing and music, accompanied by fireworks. Additionally, this is an ideal time to visit cooler hill stations and the Himalayas where the temperatures are ideal during the Indian summer like Shimla, McLeod Ganj, Mussoorie and Leh Ladakh.

This month, temperatures continue to soar above 40°C. Occasional monsoon storms increase bringing much-needed respite from the heat, though the nights remain hot and humid.However, everywhere is air-conditioned so it is still a good time travel. Also, with the heat comes low season prices so you can save on hotels and enjoy the sights with less tourists. Alternatively, this is an ideal time to visit cooler hill stations and the Himalayas where the temperatures are ideal during the Indian summer like Shimla, McLeod Ganj, Mussoorie and Leh Ladakh.

The monsoon is in full swing in July, with periodic heavy rains. But, the accommodation rates remain low and there are smaller crowds. The Aravalli hills also change colour into a beautiful bright green landscape. This all means it’s a great time for photography and, although hot, travelling is possible with air conditioning. This is also a wonderful time to visit cooler hill stations where the temperatures are ideal during the Indian summer like Shimla, McLeod Ganj, Mussoorie and Leh Ladakh.

Monsoon season is well under way. The prices remain low as do the number of tourists. Independence Day is celebrated on 15thAugust marking the anniversary of India’s independence from Britain in 1947. Celebrations are a show of all-out patriotism with flag-hoisting ceremonies, parades and patriotic cultural programs. Teej Festival ‘the Festival of Swings’ also takes place this month, which celebrates marital bliss. Young women and girls swing on decorated 'jhoolas’, swings adorned with flowers and ribbons, alongside elaborate processions. Additionally, this is an ideal time to visit cooler hill stations and the Himalayas where the temperatures are ideal during the Indian summer like Shimla, McLeod Ganj, Mussoorie and Leh Ladakh.

Temperatures remain high but the rains begin to cease. By the end of the month, the monsoon is over. Ranthambhore Fort makes for a particularly fascinating visit in early September when Hindus celebrate Ganesh Chaturthi, the birth of the elephant-headed god, with passion. Thousands gather at the UNESCO World Heritage site and clay idols of Ganesh are paraded.

Winter starts this month, bringing with it great weather and the start of the tourist high season. The month begins with Dussehra, which marks the victory of the Hindu god Rama over the demon-king Ravana. Then there’s the Rajasthan International Folk Festival, celebrated in either in October or November, whichfocuses on traditional dance, music and art. The event takes place in mighty Mehrangarh fort with more than 200 artists showcasing their talents. The other major festival is Diwali, which happens in either October or November. This five-day festival is a magical occasion of giving gifts, lighting fireworks and burning lamps to lead the Hindu god Lord Rama home. After Diwali, wedding season starts and October is an auspicious time to get married.

With a blissful climate of warm days and cooler nights, November is one of the peak times for travelling. Depending on the year, Diwali takes place in either October or November. This five-day festival, it’s a magical occasion of giving gifts, lighting fireworks and burning lamps to lead the Hindu god Lord Rama home. Following Diwali is the Pushkar Camel Fair, another joyous occasion, with camel racing, dancing, folk music and ritual bathing in Pushkar’s holy lake.

Peak tourist season but for a good reason: glorious daytime weather, low humidity and cool nights. But that’s not all. It’s weddings season (which lasts until February) – and you can spot many a baraat (bridegroom’s procession), replete with white horse and brass band, on your travels. December is also the perfect time for birdwatching with India’s spectacular winter migrants completing their travels and setting up nesting colonies. 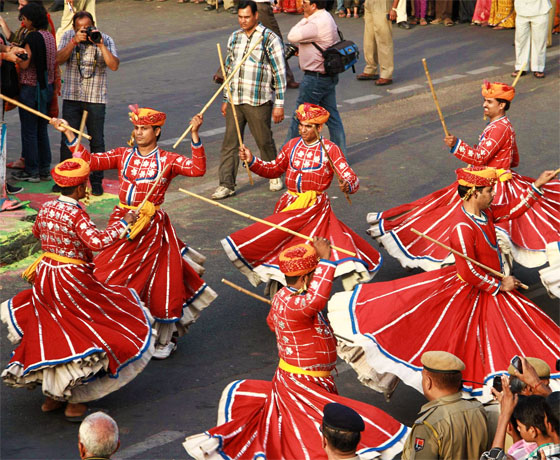 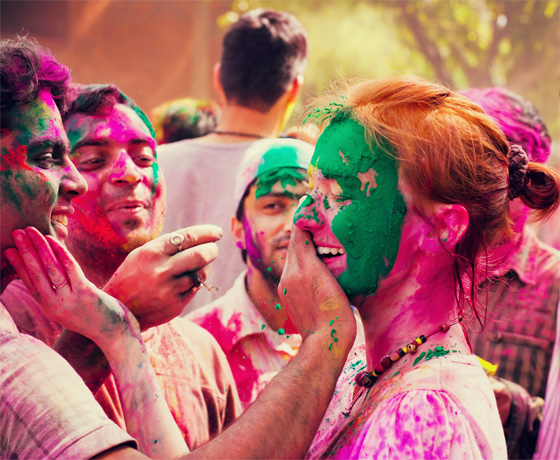 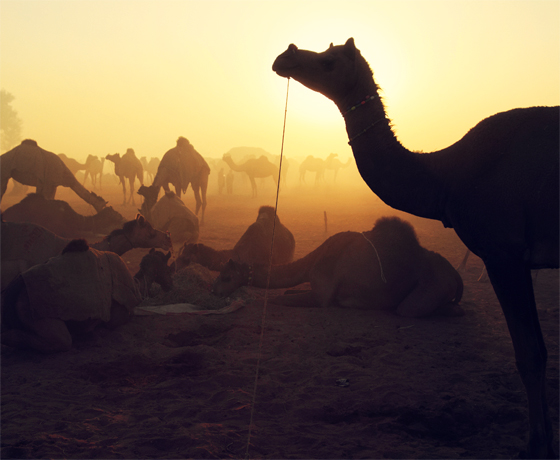 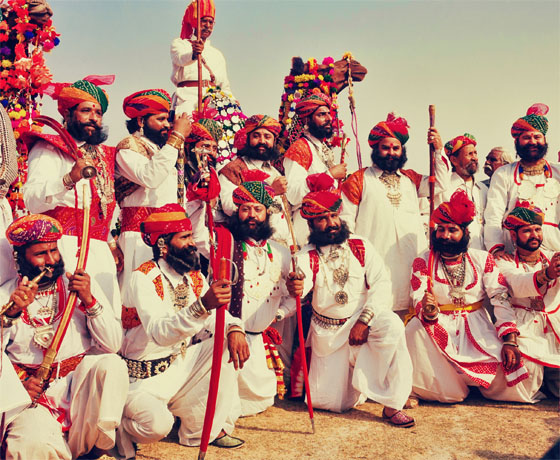 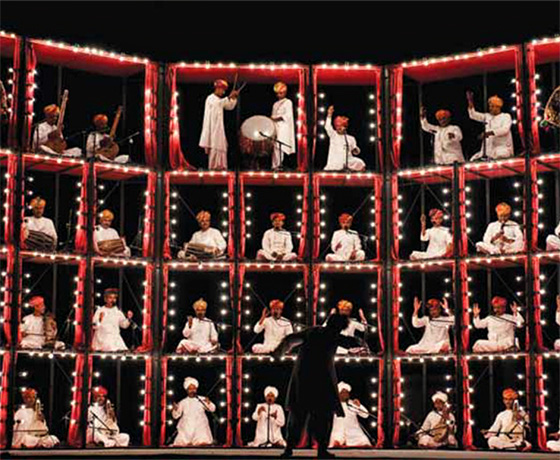 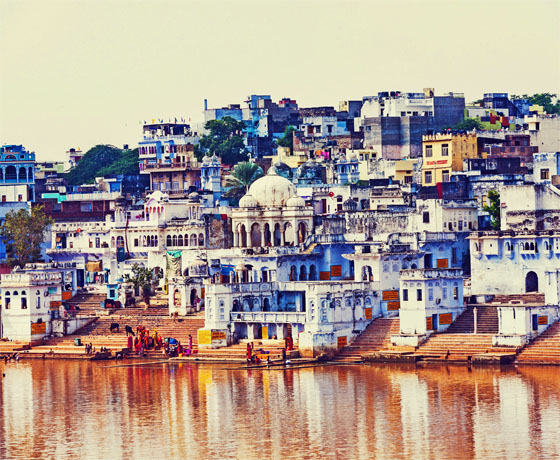